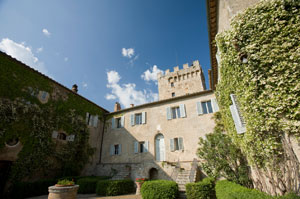 Sixteen kilometers southwest of the medieval city of Siena and 75 kilometers from Florence, the Tenuta di Spannocchia sits high in the Montagnola Senese, at the head of three valleys. Its 12th century castle tower, 16th century villa, Fattoria farm center and outlying farmsteads attest to its historic identification with the land and life of rural Tuscany. 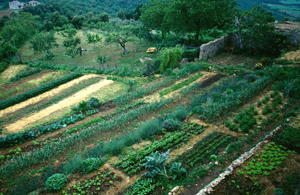 Encompassing 1200 acres of vineyards, olive groves, fields and mountain forests, Spannocchia is one of the first privately owned wildlife sanctuaries in Italy. Bordered by thousands of acres of similarly protected countryside, the property is home to a great variety of wildlife, including deer, fox, porcupines and badgers and to a multitude of bird species. The private roads and trails of the estate beckon the visitor to walk among the magnificent holm oak, chestnut , pine woods and fields of wildflowers.
Today, the Estate at Spannocchia is committed to educating visitors about a range of conservation issues. As a working farm, it also defines a way in which the past and traditions of this historic rural community can be viably maintained in the context of our modern world.

The earliest written record of Spannocchia documents the donation of a parcel of land by Zacaria dei Spannocchi in 1255 to the monks of the nearby monastery of Santa Lucia in exchange for protection of the soul of his mother, Donna Altigrada. The remains of this monastery as well as of the medieval fortress of Castiglione che Dio Sol Sa (The Castle that Only God Knows) and of the romanesque bridge of Ponte Della Pia are among the elements which still shape the landscape of Spannocchia. 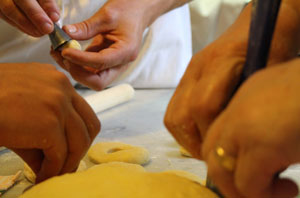 An agricultural estate (Tenuta) for the past 800 years, Spannocchia passed in the early part of the 20th century from the Spannocchi family to Delfino Cinelli, a Florentine aristocrat and noted Italian writer. The estate at that time continued to be farmed under the mezzadria tenant farming system, developed in Tuscany in the early 1100’s. This system defined rural life in Tuscany for centuries, encompassing social relations, cultural practices and agricultural methods. With the passing of the tenant farming era in the decade following World War II, Delfino’s son, Count Ferdinand Cinelli, defined a new course for Spannocchia as an educational and cultural center affiliated with the Etruscan Foundation.

The library is located in the Villa, which also provides bedrooms, a drawing room, and professional kitchen. The library is available for researchers and guests.

As a certified organic farm, the estate combines traditional methods of farming with modern advances in organic agriculture to produce its own wine, olive oil, fruits and vegetables. In this way, preservation of traditional land-use practices is coupled with the growing demand for healthful organic foods and products.